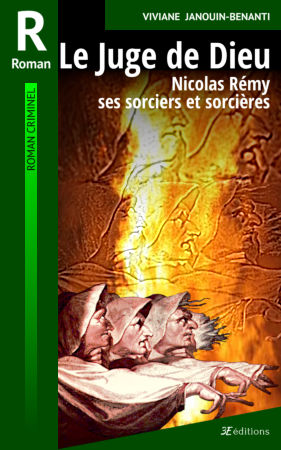 The Judge of God

Nicolas Rémy, his witches and sorcerers

In the 16th century, the plague wreaked havoc in France.

Throughout the country, accusations of witchcraft led to immediate arrest and often to the death penalty.

Men, women and children perished in the flames of the pyres.

In Lorraine, a province in the east of France, Nicolas Rémy was the worst judge. He boasted of having killed thousands of witches and sorcerers.

This book is the story of those martyrs.

A thousand lives of flesh and blood vibrate in this 21st book by the novelist Viviane Janouin-Benanti. Unforgettable.

Read an excerpt from The Judge of God - Nicolas Rémy, his witches and sorcerers on:

Paperback at € 10 available from: Amazon

Photos from the book

Articles published on The Judge of God :

In the pivotal period of the late 16th and early 17th centuries, France oscillated between the spirit of the Renaissance, combining discoveries and humanism, and fundamentalism exacerbated by the wars of religion. One seeks logical explanations for understanding the world, while remaining in the obscurantism that will later be denounced in the Age of Enlightenment.

There must be a "rational" origin for crimes, diseases, bad harvests, disappointed loves... The Churches will designate the Devil, and the judges will be in charge of finding his agents in the population: they will be witches and sorcerers.

Against those sorcerers and witches who bring misfortune, such as the terrible plague, there will be only one punishment: death on pyre.

In Lorraine, Judge Remy will see witches and sorcerers everywhere. He will take any denunciation as truth and, if need be, will obtain confessions through horrible tortures. He will boast, in good conscience, of having tortured and burned thousands of people.

This fascinating novel plunges us into this tragic period where, in an alert style, Viviane Janouin-Benanti brings Judge Rémy and some of his victims back to life. An engaging and enriching book, also giving food for thought on the constant need to look for scapegoats in the face of illnesses and events that are not well understood…

Paperback at € 10 available from: Amazon